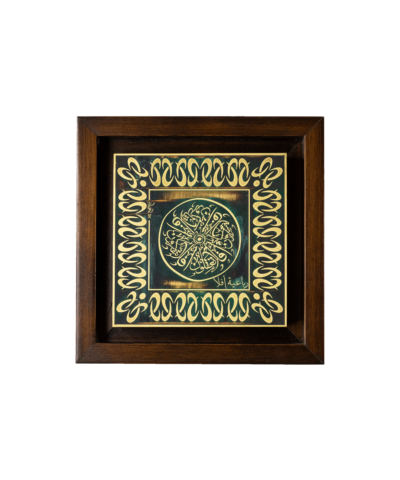 Hurry, only 1 left in stock!

Inc. Shipping and VAT / Only the purchased printed paintings don't have a right of withdrawal

Symbol of essence (Humanity and Love): it features a Dervish in love whirling around as if seeking energy from heaven to diffuse and sow it into this earth via his left hand that is nearest to the heart guided by the word “God”

Symbol of quartet Afala (Rubaiyet – The mind Alphabet): the symbol represents a whirling Sufi Dervish viewed from above and reflects the value of the mind and the prominence of meditation, remembrance and thanksgiving as the pillars of the consciousness of life

Symbol of Love : Represents the presence of Christ & his disciples on the universal circular table, where the heart of the circle consists of three flowers representing the knowledge intersecting to form three concentric fish and show the words of Luke 2:14 ” Glory to God in the highest and on earth peace, good will to all people”

Symbol of Creation (Genesis – The flow of energy): represents a whirling Sufi Dervish viewed from above with energy flowing out of him radiating from the eyes , ears and heart . It is a Cosmic energy derived from the Alphabet “N” (ن) in Arabic. The symbol comes in four letters that converge in the center. The twelve pulses represent the indicate the pursuit of perfection

There are no reviews yet.

What are you looking for?